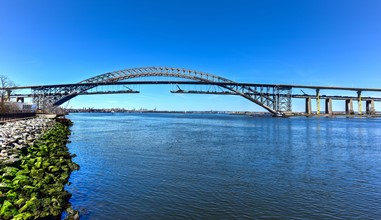 With the expansion of the Panama Canal, larger container ships can now bring goods from Asia to the East Coast with greater efficiency. These larger New-Panamax ships are longer, wider and taller than their predecessors and must get into existing ports toBayonne Bridge offload their cargos. Some of these ports have obstructions that would limit the access of the bigger ships. The Port Newark and Elizabeth-Port Authority Marine Terminal in New Jersey and Howland Hook Marine Terminal in Staten Island are examples of marine terminals that can only take smaller ships because of the low clearance of the Bayonne Bridge.

When the Bayonne Bridge was built connecting Bayonne, New Jersey, with Staten Island, New York, it was an engineering marvel. At the time of its completion, in 1931, it was the longest steel arch bridge in the world. Today it is still the fourth longest steel arch bridge in the world. When originally built, the main span was 1675 feet spanning the Kill Van Kull with a navigational clearance of 151 feet above the water. The bridge was designed to allow the largest Navy ships at the time to pass under the structure. The need to allow the New-Panamax ships into the ports would require replacement or revision of the Bayonne Bridge.

Several options were considered and eventually the Port Authority of New York and New Jersey chose a redesign of the existing structure. The bold plan would keep the structure open to traffic while the bridge deck was raised from the 151 feet of clearance to 215 feet of clearance. New approach spans would be built and the new deck would be constructed over the existing deck while the bridge was still in use. The new deck will include four 12-foot lanes, inner and outer shoulders, a median barrier and a 10-foot wide pedestrian and bicycle path.

A joint venture of Skanska and Koch-Kiewit Infrastructure Co. was awarded the contract for the project and broke ground in 2013. Because the existing steel arch would be used, lightweight concrete was specified to reduce the load. The concrete used on the main span was designed for a strength of 5,000 psi at a density of 115 pounds per cubic foot. The 20% reduction in unit weight of the structural concrete used in the bridge deck allowed the designers to pull off this engineering feat. The deck concrete was also designed to have low permeability to extend the service life of the structure.

On February 20, 2017, a portion of the upper road deck was opened to traffic. This allowed traffic to cross the structure at the higher level and removal of the lower main span bridge deck and approaches to progress. On June 30, 2017, enough of the lower deck had been removed to open the shipping channel to the taller ships. Continued construction of the approach spans and raised deck will allow the structure to be completed as designed. Currently the project is scheduled for completion in 2019.