This is the second in a continuing series of articles in ESCSI Lightweight Design eNews which address common myths or misconceptions about lightweight aggregate or lightweight concrete. These articles specifically address issues related to concrete made using expanded shale, clay, or slate (ESCS) lightweight aggregate that has been manufactured using a rotary kiln process at temperatures around 2000 deg. F. When the particles reach these high temperatures, the material softens and bubbles are formed which remain as pores when the aggregate cools. The pores within the vitrified ceramic aggregate particles give the lightweight aggregate its reduced density and other unique properties.

I will address the following myth in this second article:

Upon first glance, this myth appears to make sense. It is well known that lightweight aggregate has higher absorption than conventional aggregates, and is prewetted prior to placement to maintain slump and allow pumping. The absorbed moisture does not affect the w/cm, but is released from the lightweight aggregate with time to allow continued hydration of the cement. Any excess absorbed moisture escapes from the concrete with time by evaporation. In the past, this was not a significant issue, but with in the introduction of environmental restrictions in the late 1990s that limited volatile organic compounds (VOCs), flooring adhesives became water based, and were therefore more susceptible to degradation from the moisture being released from concrete slabs of any type.

In 2000, Suprenant and Malisch published results for a limited study of relatively small deck specimens built and stored in laboratory conditions that found drying for lightweight concrete to take much longer than for normal weight concrete. This article alarmed many designers and contractors, with the result that they began to avoid the use of lightweight concrete for building slabs to which flooring was to be installed with adhesives. However, the results reported in the article did not seem to accurately represent experience in the field.

The slabs were constructed and stored in protected, but not climate controlled, conditions, similar to a typical building. The three 12-ft-square deck specimens were constructed at the same time and were finished and cured using standard methods, including the use of walk-behind paddle finishing machines followed by covering with polyethylene sheeting for 7 days. Doors on opposite sides of the warehouse in which the slabs were constructed and stored were opened each weekday to expose the slabs to ambient conditions to replicate typical building conditions, while protecting the slabs from receiving additional moisture from rain. The air in the warehouse was not conditioned. Photos of slab specimen finishing from Craig (2011) appear below.

As reported by Craig (2011), slab drying was monitored using two methods: ASTM F1869, “Standard Test Method for Measuring Vapor Emission Rate of Concrete Subfloor Using Anhydrous Calcium Chloride”, which was used to measure the Moisture Vapor Emission Rate (MVER) at the surface of the slabs; and ASTM F2170, “Standard Test Method for Determining Relative Humidity in Concrete Floor Slabs Using in situ Probes”, which was used to measure the internal relative humidity (RH) of the test slabs. Data for both test methods were collected for a period of about 1 year.

The MVER test results for the three slabs are shown in the figure below. 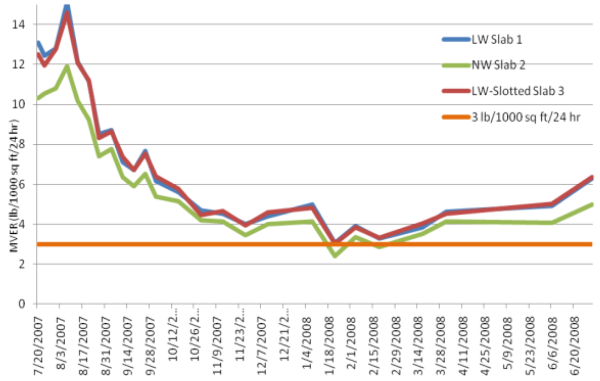 Relative humidity test results for the three slabs are shown in the figure below.

Data in this figure show that the relative humidity of all three slabs tracked together over the period, following variations in ambient conditions. The accepted relative humidity limit for placement of flooring is 75%, which is indicated on the figure. In this case, none of the slabs even approached the limit.

The second phase of the study was conducted with smaller specimens that were constructed and stored in climate-controlled conditions. The concrete mixtures were similar to the first study, using the same lightweight aggregate. For this study, the absorption of the lightweight aggregate at batching was 23.6%, which was higher than for the first study. Both concrete mixtures were proportioned with a w/cm of 0.50. Maximum concrete thicknesses for slabs were the same as for the initial study: 5.25 in. for the lightweight concrete and 6.5 in. for the normal weight concrete.

After the specimens for this phase of the study were subjected to drying for 7 months at 70 F and 50% relative humidity, neither slab had reached the target MVER of 3 lb. The normal weight concrete slab reached 4.0 lb and the lightweight concrete reached 6.4 lb. The relative humidity also did not drop below 80% for either concrete even after more than 9 months of drying, as shown in the table below, which presents data from Craig (2011).

OBSERVATIONS: Based on the findings of the ESCSI study by Craig (2011), the following observations can be made regarding the use of lightweight or normal weight concrete for elevated slabs on metal decking in buildings.

Therefore, as concluded by Craig and Wolfe (2012) after their discussion of the ESCSI test program, the “benefits of lightweight concrete shouldn’t be dismissed solely on the premise that switching to normal weight concrete will solve the concrete drying issue.”

Further discussion of this topic and strategies for mitigating high moisture content for both lightweight and normal weight concrete are discussed in Wolfe and Ries (2017). Finally, additional discussion of the benefits of using lightweight concrete for slabs on metal decking in buildings, which generally offset any concerns with drying, can be found in an article by Martin, et al. (2013).