New York Municipal Airport’s LaGuardia Field was officially dedicated on October 15, 1939. The airfield is located on the waterfront of Flushing and Bowery Bays in East Elmhurst, Queens and was constructed on a site that required moving landfill from nearby Rikers Island onto a metal reinforcing framework allowing expansion of the former North Beach Airport. The airport 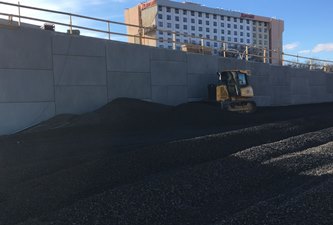 was viewed as a marvel in the early years of air travel with crowds coming out to watch the airliners takeoff and land. Its close proximity to Manhattan made it an ideal location at the time.

Although large for the era in which the airport was built, LaGuardia soon became too small to support the needs of New York. Many renovations and expansions took place over the years but additional measures were needed to limit the amount of air traffic. Heavy fees for general aviation aircraft and instituting a Sunday-thru-Friday “perimeter rule” banning nonstop flights from LaGuardia to cities more than 1,500 miles away helped to reduce flights. But even with the restrictions, LaGuardia still sees over 30 million travelers, 6,000 tons of cargo and 4,000 tons of mail per year. The airport has become well-known for delays and cancellations eventually earning it a spot on the list of the 15 worst airports in the world.

In 2015, New York Governor, Andrew Cuomo, announced the redevelopment of LaGuardia. The $8 billion project – comprising the construction of an entirely new airport on top of an existing one while keeping it fully operational – is the most significant new airport project in the United States in more than 20 years. The new main terminal, set to replace Terminal B by 2020, will be 1.3 million square feet and 35 gates. This new terminal has been moved 600 feet closer to Grand Central Parkway allowing room for 2 miles of new taxiways on the airside of the terminal. The second phase of construction will connect it with Terminals C and D with a nearly mile-long hallway.

Outside of the terminal, the following landside improvements were kept in mind during the design:

A new parking garage, three levels of traffic along the terminal frontage, 8 miles of roadways and 24 new bridges are all part of the complicated design utilized to achieve these improvements. Packing this amount of traffic into such a small footprint required many levels of roadways and multiple bridges. Building these heavy structures on the poor waterfront soils required the use of innovative fill materials under roads and behind MSE Walls. Expanded shale fill provided the properties needed in the design. Its light weight, 60 PCF in place is half that of conventional fills, while its high angle of internal friction (above 40o) reduced the loads imposed on the retaining walls.

When the new LaGuardia Airport fully opens in 2021, it will be a transportation hub that New Yorkers can be proud of that more efficiently services their traveling needs.