The original U.S. patent on the rotary kiln process for manufacturing “Haydite” 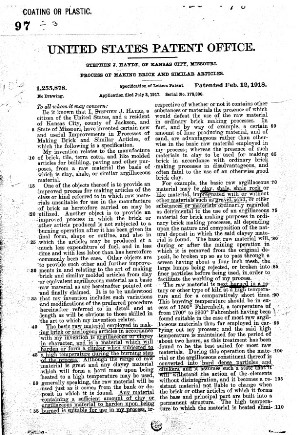 expanded shale clay and slate (ESCS) was awarded to Stephen Hayde on February 18, 1918. Hayde had considerable practical knowledge of construction and construction problems, coupled with an inquiring, inventive and resourceful mind. To celebrate and honor the 100 years since this key moment in our industry, here’s a brief look back at the “father of lightweight aggregate” and the material he invented.

The Story of Stephen J. Hayde

The son of Irish immigrants, Stephen J. Hayde, was born in 1861 in Keokuk, Iowa. Growing up in Kansas City, he worked with his father repairing buildings and bridges. After spending a few years in San Francisco, Stephen returned home where he became well known as a brick maker and building contractor.

Brick making at that time used down-draft beehive kilns. Because the temperature varied greatly within the kiln, the process was rather inefficient. After each batch of brick was fired, the brick had to be hand-sorted into three separate categories. The highest quality brick were placed in the exterior brick inventory. Exterior brick had to be capable of resisting rain penetration and the effects of freezing and thawing. The next level of quality was designated interior brick. The third category was “bloaters,” brick that had been heated too rapidly for the gases generated within the clay to dissipate, causing them to expand by more than a third of their original size. Brick made from certain clay deposits retained this expanded shape upon cooling. The bloaters were typically placed in a scrap pile.

On closer inspection, Stephen Hayde observed that the internal structure of the scrap brick was essentially non-interconnected voids surrounded by a hard, impermeable ceramic matrix. He had the insight to realize the potential value of the waste brick if it could be crushed, graded and used as a concrete aggregate. The resulting concrete had a lower density than typical concrete, but retained the strength. He was so sure of the virtues of his new material that on January 29, 1914 he engaged a patent attorney, even as he continued to experiment with different ways to bloat the clay. Later that year, his experiments at the Ocean Shore Iron Works in San Francisco proved that the resulting aggregate had no planes of weakness, even when the raw material was laminated shale or slate.

After returning from San Francisco, Stephen managed the Flannigan–Zeller Brick Company in Kansas City, where he had access to brick kilns and the rejects from the brick making process which he could crush into aggregate suitable for doing research on low density concrete. He experimented with placing balls of clay in different locations in the brick kilns with the aim of identifying the correct time-temperature relationship to produce aggregates  that could be used to produce optimum properties in concrete. In 1917, his tests showed that a rotary kiln could be used to economically produce expanded shale, clay and slate in large quantities with properties that are identical to those being produced today.

A patent was issued to Stephen Hayde on February 18, 1918 (U.S. Patent No. 1,255,878) and remained in effect until 1947. The patent covered “argillaceous” material and specifically mentioned “special clay, slate and shale rock,” and specified that the product must be heated to a temperature of 1220° C for about two hours.