As land development increases, the amount of impervious surfaces, such as rooftops, parking lots and roads increase the stormwater runoff. In urban areas, the increase in runoff often overtakes the storm sewer system resulting in increased water flow into nearby streams, causing local flooding, stream channel erosion and pollution. Water quality is affected by the accumulation of 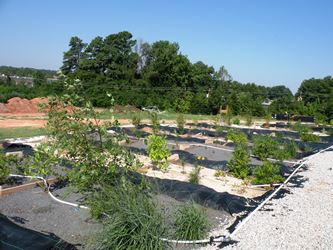 fertilizers and pesticides applied to lawns, sediment from bare or poorly vegetated ground, trash and oil products from cars and other pollutants entering creeks and rivers. Inflow of sediment can cloud water and settle to the bottom of streams, clogging the beds used by fish for laying their eggs. Nutrients, such as phosphorous and nitrogen, from fertilizers enter the water and promote algae growth. As the algae dies, its decomposition reduces or eliminates oxygen needed by fish, shellfish and other aquatic life for survival. These are all examples of nonpoint source pollution, one of the major contributors to the degradation of waterways. Stormwater management controls nonpoint source pollution through the use of structural and nonstructural best management practices (BMPs) now called Stormwater Control Measures (SCM). SCM’s are designed to intercept runoff from developed areas, filtering and treating stormwater runoff, and then discharging the water at a controlled rate into the creeks and rivers. One of the best ways to control runoff is constructing a bioretention basin which is also called a rain garden.

A rain garden is a shallow two to three foot deep trench or basin filled with a filtering growing media consisting of a sandy media blend with a small amount of organic material such as compost or pine bark fines. The rain garden can be planted with plants such as iris, cattails, flowers, shrubs, grasses and even trees. The stormwater runoff enters the rain garden and gradually seeps into the filtering media, removing pollutants and recharging groundwater. Rain gardens treating larger amounts of water may also have an underdrain that takes the treated water to a discharge point such as a creek or catch basin. As the plants grow, they take up the water, removing the nutrient pollutants while good bacteria in the medium remediate the oils and other pollutants.

The bioretention basin is often located in the back of the property and must be maintained. If not maintained, it may transform into a stagnate mud hole; hardly the type of landscape feature anyone wants. This brings up the question, “can rain gardens be designed into the landscape as an aesthetic feature serving the dual purpose as a stormwater control device?” The answer is yes with proper media and plant selection, regular maintenance and routine irrigation.

Bioretention cells, basins, or systems come in all shapes and sizes. Some are engineered to just be performing devices and others in addition, also serve as an aesthetic part of the landscape plan. Bioretention basins can be designed to look and perform like gardens or be covered with turf while providing the SCM function. When designing bioretention basins, the complexity of the soils and potential influx of silt into the system from the runoff must be considered as this can result in the clogging and failure of the system. Most systems that just use natural soil parameters may result in higher maintenance or total replacement in five years. This is why it is so important to use the proper media blend, vegetate and stabilize the surrounding area before installing a rain garden.

Many state environmental regulators have struggled with specifying the proper media to perform all that is required. Many engineers have underestimated the value that plants bring to the equation. It has been proven that rain gardens and plants perform better in expanded shale, clay and slate (ESCS) media blends than they do in similar sand blends. Since 2004, Carolina Stalite Company in collaboration with NC State University has conducted research using expanded slate lightweight aggregate fines to replace the sand component of the media for bioretention. In 2012, two extensive research projects were completed. One project at UNC Charlotte involved column testing of expanded slate passing # 16 sieve size. The second used expanded slate in research field trials at NC State University (HORTSCIENCE 49(5):645–652. 2014). The field trials used expanded slate alongside two other sand blends media. The field trials simulated stormwater filtering in planted bioretention cells. The research showed that the bioretention media using expanded slate functioned very well as a media to remove phosphorus and nitrogen from the simulated stormwater. Compared with sand, expanded slate had the best overall retention of nitrogen, having 86% removal initially and 99% removal by the end of the study. In regard to phosphorous, the expanded slate media had the best overall remediation at 99% (Kraus). The NC State field trial research also demonstrated the important role plants play. Plants establish quicker and survived during dry periods because the aeration capabilities of the expanded slate media allowed roots to grow longer and deeper within the system. This benefit has also been observed where the expanded slate media has been used in many installations throughout North Carolina and elsewhere.

Because of the natural cation exchange capacity of the ASTM C-330 ESCS lightweight aggregate media, its ability to attract phosphorous ions is enhanced. The angular shape of the ESCS particles includes micropores providing an additional porous surface area containing approximately 54% available pore space on the particle surface, allowing water to be retained and released slowly within the system. This angular shape also can trap fines from runoff. This reduces the chance of the migration of fines to the base of the system, thereby helping to prevent future clogging. Natural sands rounded or cube shaped particles allow silts to filter through directly to the filter fabric increasing the chance of clogging. With ESCS, the system is more sustainable because silt contamination from site erosion and sludge from pavement is trapped on the media surface and can easily be skimmed and removed. ESCS’s superior media with easier maintenance, enhanced plant growth and higher nutrient removal rates present a compelling argument for using ESCS to create the ultimate rain garden.