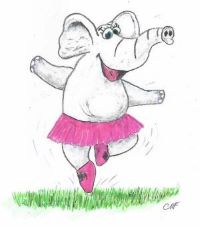 Remember TV or movie episodes where claustrophobic, panic stricken characters are imprisoned in a small windowless room? Then, their worst fears materialize as the ceiling and walls begin to slowly close in on them; then with just seconds to spare the fast thinking hero just happens to spot a four-foot steel rod in the corner, grabs it and braces the ceiling halting the impending pancake scenario. Now, let us break from the “reality” of a compressing ceiling to the roots of grass plants. Imagine you are one of many turf roots in a typical soil and instead of a ceiling crushing you, it is a truck tire, a stampede of elephants, the offensive line of the Washington Football Team, or just daily foot traffic. Plant roots, whether of tree or grass, need air to survive and the constant compaction of the soil around them reduces the voids that allow for the movement of air and water through the soil profile.

The Perfect Soil Condition
Soils consist of three space-occupying components: solid particles, water and air, it is necessary to maintain a careful balance of these elements to establish a good soil profile. Generally speaking, a good soil profile is approximately 25% water, 25% air, and 50% solid particulate matter. In the natural forest floor or grass land are areas that people don’t visit, there are tree canopies or dense tall grass that protect the soil surface from the heavy rains that compact soil over time. In this undisturbed environment, organic matter (leaves, branches, insects etc.) that die and decompose on the forest floor are able to break down into slimes that can flow down through the uncompacted soil, adhere to clay particles and form natural clots or aggregates (natural soil aggregation) in the soil that in turn create gaps for air and gas exchange, water movement, nutrient conversion, and root growth. Transition to the built environment with traffic vibration and human activities, soils are compacted, therefore an imbalance occurs due to the change in the soil structure. Solid particles are pressed together eliminating space for the water and air. With less pore space, soils become too dense for the movement of water and for the exchange of air and nutrients. With this compacted soil condition, the favorable environment necessary for a healthy growing condition is lost or absent.

Reduce Soil Compaction
How do we artificially create this “perfect soil condition”? Typically organic matter is added to the soil to recreate natural voids in the soil, lawns however, do not recover quickly from compaction by vehicles or the heavy foot traffic of major activities. Organic amendments degrade and under pressure fine particles compact together again. To help alleviate re-compaction, a media developed by Jim Patterson for the National Park Service in the late 1980’s consisted of a mixture of 75% graded expanded lightweight aggregate, a 20% root zone sand with a 5% organic blend, it provided a stable root zone that sustained a quality lawn while also assuring support from occasional compaction. He noted much faster recovery when the turf was stressed from public use of the areas. In addition to the voids between the particles, ESCS (expanded shale, clay or slate lightweight aggregate) also contains many pores on the surface of each particle which provides additional space for air, water and beneficial microbes. 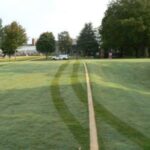 Engineered Soil for Firelanes
Many building codes now require fire lanes that will allow access by heavy emergency vehicles to the edges of buildings or public spaces. Typically only paving or block-reinforced turf was accepted. Now a structural engineered soil designed for turf will meet the high compressive support requirements for fire lanes. The ESCS fire lane blend will also support periodic vehicular parking and heavy emergency vehicles at 48,000 lbs. per square foot for each load point. The mechanics of this matrix involves the particles of ESCS to touch each other to support the load, while the voids between them accept a sandy blend allowing space for roots, water and air, protected from compaction. The makeup of the material involves providing a three to one blend that consists of three parts of moistened ESCS aggregates within a gradation of 3/8” to #8 mesh size (9.5 to 2.7 mm) to one part of coarse to medium sand mixed with about 5% compost or peat by volume. The area to accept the system is excavated to a depth of 8 to 10”, then the subgrade is compacted to 95% standard proctor. Depending on the grade elevations, it is recommended to install a sub-drain system to take away excess water. Geotechnical fabric may also be installed over the subgrade surface. The ESCS media is spread in a one foot lift and then compacted in two passes with a vibratory roller or plate. A sand based sod is required to provide proper water infiltration and should be immediately placed after the compaction is completed. Irrigation is a requirement for establishment and future maintenance. After the sod is installed, the crunching under foot demonstrates the concept, providing a healthy turf ready to accept an emergency vehicle in any weather. 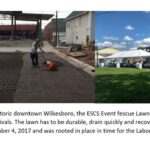 Event Lawns
The use of natural lawns for parks, sports, and venues for entertainment and gatherings has always been popular especially in urban areas. Turf recovery after heavy use has been a difficult task, often requiring total renovation or replacement after an event or in most cases at the end of the season. As with the concept of the firelane application, event lawn media uses a similar recipe for success. Since the need for emergency access is not the main concern, a less coarse soil design can be implemented. While the event lawn media is designed to reduce the compaction within the root zone, it is not a requirement that it support a fire truck. Its main purpose is to provide enough root protection and aeration to speed up the turf recovery time after use and also allow immediate access after rain no matter how intense. In most cases the individual turf plants will suffer damage from all the foot traffic, however the special root zone concoction helps speed up the recovery by providing enough root protection and a favorable environment to assist the plant biology. The media consists of a mixture of 60-70% ESCS fines #4 screen minus to #60 (2.7 – 0.25 mm) with the remainder being of a sand/compost blend. The installation of the event lawn system is almost identical to the firelane system but without the need for subgrade compaction or geotechnical fabric. Eight to ten inches of the media, sand base sod and irrigation finishes out the process. Use of the lawn after the sod is laid can in about three weeks during the growing season. 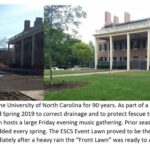 Tested over the last thirty years, ESCS engineered media for turf as surpassed expectations and is now being specified as a BMP (best-management-practice) to reduce storm water runoff in urban areas. So, the next time you are trapped in a room where the ceiling and walls closing in on you, I hope a big pile of ESCS is in the center of the room to take the load and prevent the making of a human pancake.