The Story of Structural Lightweight Concrete

The first commercial plant dedicated to expanded shale aggregate began operating in Kansas City, Missouri in 1920 under the name Haydite Company. Where wartime production had been handled at brick and cement plants, the Haydite Company was a bona fide expanded shale aggregate plant with a mission to both produce the material and introduce it into the commercial construction market.

There were few design criteria available that could apply to uses of lightweight concrete in building construction, and little inclination among architects, engineers and builders to risk their reputations by experimenting with the new material. It was taken for granted that in order to be impermeable as well as durable and strong, concrete had to be of maximum density and weight. So it was not until 1922 that the industry had a “living example” – a building employing lightweight structural concrete and demonstrating both its economics and its construction reliability.

This was a gymnasium addition to the Westport High School in Kansas City, the first lightweight concrete building in history. Designed by a pioneering architect, the building employed lightweight concrete to avoid the difficult foundation work that would have been required with conventional weight concrete because of the poor load-bearing characteristics of the soil at the site. At the time, the expanded shale aggregate sold at more than double the cost of sand and gravel, and yet the economies in foundation engineering made possible by the reduction in deadweight load more than compensated for the price differential. 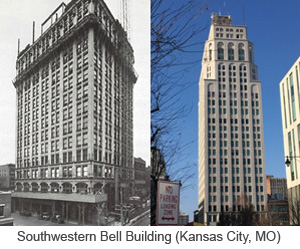 undertaken in 1928 and 1929, in the form of an addition to the Southwestern Bell Telephone Company office in Kansas City. The building was originally built as a 14-story structure, and the company had found that the foundations and underpinning would support an additional eight floors, taking into account the additional deadload of conventional heavyweight concrete.

However, analysis by the designers indicated that by the use of lightweight expanded shale concrete rather than conventional sand and gravel concrete 14 floors could be safely added rather than eight – in effect, doubling the above-ground height of the building and producing a skyscraper with a total of 28 floors. The project was undertaken with concrete mixed on-site (this was before the day of the ready-mix plant) with the relatively crude mixing equipment of the day. There were naturally some technical problems, primarily in producing a uniform and workable mix and placing the concrete in column and beam forms, but these were overcome by applying technical knowledge developed at the University of Kansas.

With these demonstrations of the feasibility of lightweight structural concrete in high-rise buildings, acceptance of the product was established, and succeeding years saw an increasing number of architects and engineers specifying it for major construction projects.