The Story of the U.S.S. Selma

Although small concrete ships had been built successfully in the Scandinavian countries, the project envisioned by the Fleet Corporation was on a much larger scale: a 7,500-ton tanker with a length of 434 feet, a beam of 43 feet and a draft with full cargo of 26 feet. Needless to say, the construction of a concrete ship of these dimensions required – in addition to the development of a suitable lightweight aggregate – innovations in both form construction and in placing the concrete in the heavily reinforced thin sections. In order to obtain uniform placement of the concrete in the heavy mats of reinforcing steel, an apparatus for controlling concrete consistency was developed resulting in the “slump cone” test, ASTM C143, which is widely used today. 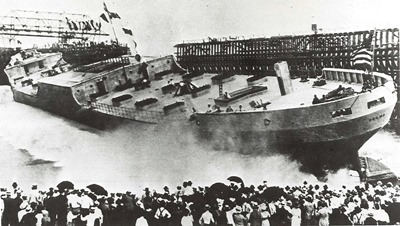 Such a ship was in fact constructed using 100% expanded shale lightweight aggregate and it was launched in June 1919. She was christened the U.S.S. Selma, after the city in Alabama and honoring it for a Liberty Loan drive. The Selma was not the first concrete ship to be constructed in the United States – the 3,000-ton Atlantis using normal weight aggregate had been launched in December 1918 – but she was the largest. Since the research had indicated that improved performance could be achieved using a uniform lightweight aggregate produced by the rotary kiln method, the Atlas Portland Cement Company was contracted to produce expanded shale aggregate in their kilns at Hannibal, Missouri.

Another “first” scored by the Selma was that she was the first large vessel to be launched sideways, and although there was some concern as the whether the launching would be successful, 20 shipyard employees confidently rode the ship down the ways.

The war was over by the time the Selma was completed. However, she was still put into service as an oil tanker in the Gulf of Mexico. Unfortunately, in 1920, the Selma hit a jetty, ripping a 60 foot hole in her hull. After several failed attempts to repair her, it was decided to intentionally scuttle the ship in Galveston Bay where she still rests to this day. She remains important to scientists who continue to study aspects of its concrete construction. In total, 104 lightweight concrete ships were built in the United States.

In July 1953, the Engineers Testing Laboratory, Inc. of Houston, Texas was employed by the Expanded Shale, Clay and Slate Institute to inspect the hull of the Selma in Galveston Bay and make a preliminary investigation and report on the concrete, which at that time had been in sea water for 34 years. They cut specimens out of the hull and interior compartment ribs, examined the condition of the steel and also observed the general condition of the concrete. Specimens from the hull were taken in that band which was alternately exposed to sea water and salt air by action of wind and tides. Specimens from the compartment ribs had been exposed to salt air only.

The report stated that the concrete was in excellent condition in both of these areas; some of the hull concrete was chipped out to a depth of 1/4 in. and at that depth the concrete appeared to by dry and without discoloration from absorbed water. An examination of the interior of the hull showed that the concrete was in very good condition and no cracks were visible. The report found the reinforcing steel in excellent condition with no pitting of the bars and concluded that the slight coating of rust could well have been on the bar when they were placed. The report also pointed out that in many places there was only 5/8 in. of concrete over the reinforcing steel.

The story doesn’t end there. In 1980, the Selma performance was reviewed again with cores taken to update the 1953 study. After 60 years, the cores revealed little if any deterioration with no evidence of micro cracking and with concrete strength of 70 MPa (10.2 ksi). Once again, there was little evidence of rusting and almost no sign of corrosion at the reinforcing bar.

In 1999, the excellent performance of lightweight concrete ships was confirmed again on a sister ship to the Selma constructed in 1920 and four other lightweight concrete ships built in the early 1940’s, all still floating in the Georgia Straits at Pacific Paper Powell River Plant in British Columbia. A research report was published in ACI SP 189-7, 2000, titled Evaluation of Lightweight Concrete Performance in 55 to 80 Year Old Ships, by R.D. Sturm, N. McAshkill, R. G. Burg, and D. R. Morgan. The results of the strength, petro-graphic and other tests indicated that the lightweight concrete ships performed well, considering the harsh marine environment to which they were exposed.