In June of 2014, The University of Notre Dame announced the largest building 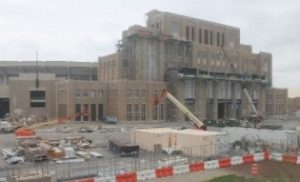 project ever undertaken in its 172-year history – The Campus Crossroads Project. The $400-million project integrates the academy, student life and athletics with the construction of more than 750,000 square feet in three new buildings attached to the west, east and south sides of the University’s iconic football stadium.

The south building will house the Department of Music and the Sacred Music at Notre Dame including recital and rehearsal space, classrooms and offices. In addition, a digital media center with a 2000-sf studio and production and classroom space will be included. The east building, Corbett Family Hall, will house the Department of Anthropology and the department of Psychology. The west building, Duncan Student Center, will house a student life center featuring undergraduate and graduate lounges, student organization offices and recreation and fitness facilities. The building will also include a centralized career services center.

Only the top three of the nine floors of the East and West buildings will be dedicated to the Notre Dame Football Stadium which includes an expanded and updated press box facilities along with premium suites. The north side of the south building extending above the stadium bowl will have the new score board with video capability.

Of the more than 58,000 cubic yards of concrete poured on the project, over 16,900 cubic yards of it was 4000 and 5000 psi structural lightweight concrete (SLWC). SLWC was placed on metal deck by pump from the ground floor up to and including the roof of the 9th floor. Five-inch steel pump lines were used on deck with a maximum 40 feet of 4” rubber hose. The rubber hose was, in turn, connected to a remotely-controlled “Line Dragon” to facilitate the placement of the 115 pcf, 6% entrained air, 7” slump SLWC.

Placement rates, on many pours, exceeded 150 cubic yards per hour by use of the Line Dragon equipment saving labor and reducing the time to break pipe and resume placement. Placement of over 600 cubic yards in a continuous deck pour was accomplished in one instance. Many pours of 300 and 400 cubic yards were also made with no pumping problems. An additional 900 cubic yards of SLWC was placed to construct the roof of the underground parking structure.