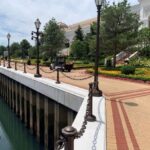 casinos to be built in the state. A casino would be built in the greater Boston area as one of these sites. With a centuries old established metropolitan area, finding a suitable piece of land to build the casino on would be difficult. All of the proposals that were submitted included land that would be reclaimed from a prior use. Wynn Resorts selected a 33-acre parcel of land along the Mystic River in the suburb of Everett 3 miles north of downtown Boston. The site chosen was in an industrial section of town and had originally been home to a dye house as early as 1804. Later in the 1800’s, the shoreline was expanded by backfilling along the river and a succession of chemical plants occupied the property.

With the site’s industrial past and location along a waterway, extensive remediation was needed to prepare the site for the resort’s use. In the end, $68 million was spent on removing 840,000 tons of contaminated soil and dredging 41,000 tons of contaminated sediment. The area along the waterfront was a tidal area that would be reclaimed using sheetpile with fill behind it to support the roadways and gardens areas along the project’s harborwalk. Because of the soft soils along the river, a fill that would minimize loading was needed. The project’s designers chose expanded shale fill with an in place compacted density of half that of ordinary fills and an angle of internal friction of over 40 degrees for this application. The elevations along the river were raised using the lightweight fill to meet the project’s needs.

After the site was remediated, the 3-million-square-foot Encore Boston Harbor Resort was constructed. The property includes a 27-story hotel with 671 rooms and luxury suites, a 210,000 square foot two level casino, 15 dining and lounge venues, 50,000 square feet of indoor and outdoor event space, a luxury spa and the year round 6-acre harborwalk built along the waterfront. The $2.6 billion resort opened in June of 2019.